This new release is available in a 2CD slipcase.
Posted by LeslieMJHu at 11:45 PM No comments:

"MJ Japan" released a new Michael Jackson merchandise this June. According to the company's press release the official Jackson-stamp collection will be available only in Japan for 5.250 yen (~50 USD) in a limited 10.000 number. Each box has a special cover and 10 different stamps about the King Of Pop.

The product's official website can be found here: http://www.cue-blayn.co.jp

"MJ Japan" is an authorized merchandising and licensing agent for Jackson in Japan.
Posted by LeslieMJHu at 1:51 AM 1 comment:

A personal note: I've decided to do an interview with Roger Friedman, the man hated so much by the fans. I wanted to know what is in his mind for real. I wanted to create a nice thing. But this turned out for something that I can't handle in a positive way... I don't want to generate more hate on any of the sides, this must end now! Peace, Leslie!

(this is a shortened version of the full interview)

MJ.hu: When and how did You start out as a journalist?
Friedman: I started a school newspaper when I was 12 years old, in the 6th grade, and never looked back. By the way, it was composed on a Royal Manual Typewriter.

MJ.hu: Why FOX? And what does the 'Fox411' column mean for You?
Friedman: The Fox News Channel hired me from New York magazine nine years ago. I named the column Fox411 so it would include the network's name and convey information. In America, you dial the numbers 411 for information on the phone.

MJ.hu: Have You ever met with him personally?
Friedman: I met Michael in November 2000 when he was then enthralled with Shmuley Boteach. It was at a dinner party. He wore sunglasses at night, spoke in a hushed whisper, and told me cried often.

MJ.hu: Why did You start to write about Mr. Jackson? What was Your very first article about him?
Friedman: I've been writing about Michael for at least 20 years.

MJ.hu: Am I right if I say that Mr. Jackson has a special position in Your column?
Friedman: Michael is like a lot of celebrities who populate my column.

MJ.hu: What do You think about his music? Do You have any of his CD's in Your home?
Friedman: Michael's music prior to HIStory was pretty damn good. Like everyone, I was a fan of Thriller and Off the Wall. I liked a song he did with Paul McCartney called "The Man" that was on one of Paul's albums.

MJ.hu: Did You know that the fans used Your column as a "bible" for years? Even if You had bad news about Mr. Jackson...
Friedman: That's flattering. I try to report about Michael accurately.

MJ.hu: Now You are banned from most of the fan boards, because many fans feels like You went too far. What do You think about it?
Friedman: As long as they spell my name right, it's okay.

MJ.hu: What are Your feeling towards Mr. Jackson as a person? What did You think about the trial and his innocence?
Friedman: I feel sorry for Michael Jackson. He's in a trap of his own making. For a while he could blame his parents, but his life is own responsibility. He's almost 50.

MJ.hu: Weeks ago Mr. Jackson's spokesperson threated You with a legal action. Any updates or comments on this matter?
Friedman: No. Nothing happened.

MJ.hu: Is it true that a Jackson impersonator appeared on Your birthday party this year? How did this happen?
Friedman: Yes,that's true! Friends of mine thought it would be funny. It was certainly a surprise. The man was very good.

MJ.hu: What would be Your reaction if the fans would invite You to a Jackson party?
Friedman: I'd be honored to be invited.


(if You would like to use this interview, give a return link to my blog)
Posted by LeslieMJHu at 11:53 PM 4 comments:

It is not known if the are any differences to the original CD.
Posted by LeslieMJHu at 1:41 PM No comments:

An unofficial 'Bad' concert DVD reached out to the markets. The release is also available on Amazon.

Tracks: Wanna Be Startin' Somethin' - Things I do For You - Off The Wall - Human Nature - Heartbreak Hotel - She's Out Of My Life - I Want You Back - The Love You Save - I'll Be There - Rock With You - Lovely One - Working Day And Night - Beat It - Billie Jean - Shake Your Body - Thriller - I Just Can't Stop Loving You - Bad
Posted by LeslieMJHu at 12:41 PM 2 comments:

MJ Will Be Deposed in Washington!

MichaelJackson.hu has been informed about that MJ will be deposed in Washington in the next several days!

MJ's lawyers agreed to take a deposition in the Dieter Wiesner case. According to the court documents, MJ will take the questions first, and Wiesner will follow him immediaetly.

A mandatory settlement conference will be held in the case next monday.

We have been informed about that Mr. Wiesner travelled to Las Vegas days ago in order to meet with MJ. Mr Wiesner will leave US at the end of this week.
Posted by LeslieMJHu at 11:58 PM 1 comment: 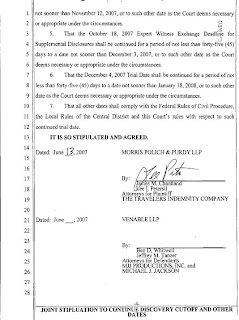 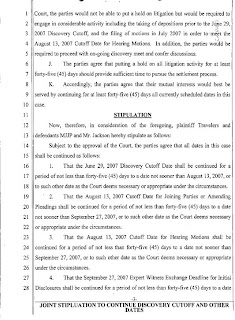 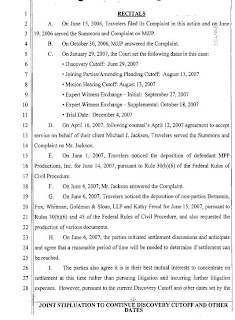 The trial date has been set for December 4, 2007. However the attached court documents shows that the parties agreed to settle the case out of court.
Posted by LeslieMJHu at 11:44 PM No comments:

Updates About The New CD 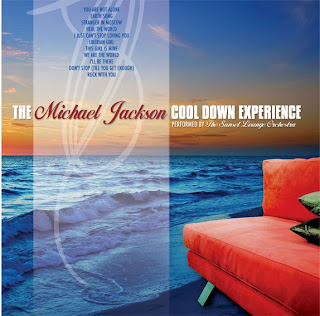 We have been informed by the producers of the new CD that 'the 5 new titles are tracks written and recorded by the production team inspired by MJ's work'.

As well MichaelJackson.hu received a HD picture about the CD's front cover.
Posted by LeslieMJHu at 9:31 PM No comments:

Rare video footages about MJ and Lisa-Marie Presley on Neverland in 1995.

(in order to download use Your registration on MichaelJackson.hu; or register here: REGISTER )
Posted by LeslieMJHu at 4:51 PM No comments:

In the Ayscough vs. Jackson case the judgement has been released yesterday, however the details are not known.

In the Jackson vs. Bernstein case the parties completed the arbitration, but both of them requested for a jury trial. The trial will start on July 22nd, and is expected to take 10-15 days.
Posted by LeslieMJHu at 9:05 AM No comments: 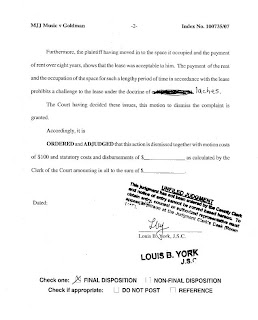 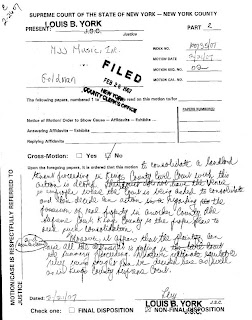 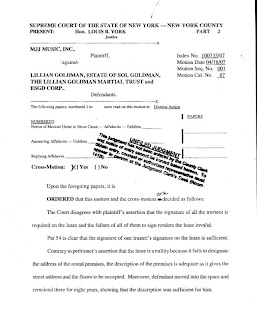 "MJJ Music Inc." sued Lillian Goldman this February in New York. The case has been dismissed 2 months later. For more details see the court documents above!
Posted by LeslieMJHu at 1:21 AM No comments:

Listen to the 4 Never Before Heard Songs

Few days ago we reported about a new MJ compilation CD, called "The MICHAEL JACKSON Cool Down Experience".

This new release has 4 never before heard songs:
The Mystery of Dreams
Last Chance
Brothers of the South
Neverland's Fable

Here You can listen to the songs: CLICK HERE
Posted by LeslieMJHu at 1:00 AM No comments: 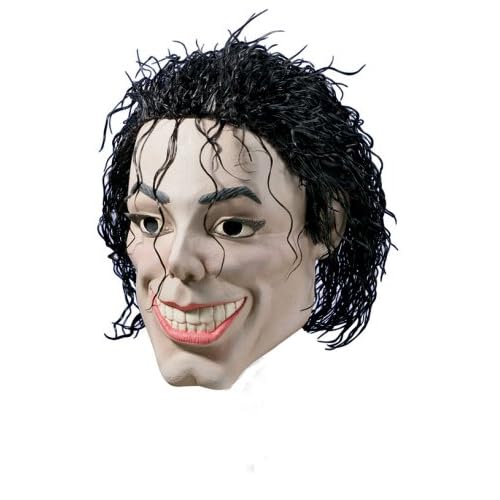 This full-head mask has been released in Germany on June 24th, 2007.
Posted by LeslieMJHu at 9:59 PM No comments:

This compilation CD has been released in Japan on April 25, 2007. The release has a quiet funny cover.

9 KOKA - Bad
10 BIG MAMA - Blame It On The Boogie
11 PURPLE-BEAT - You Rock My World
12 UNLIMITED BEAT - Michael Jackson Medley
Posted by LeslieMJHu at 9:53 PM No comments:

"Sunset Driver" on a Compilation CD

Surprisingly "Sunset Driver" has been recently released on a ompilation CD in France
Posted by LeslieMJHu at 2:33 AM No comments:

Taj Jackson posted a story about the MJ - 'Dreamworks' connection on his personal blog.

"I was contacted today and was politely asked to remove some "certain things" from my blog."- reveals Taj.
Posted by LeslieMJHu at 2:51 AM 1 comment: 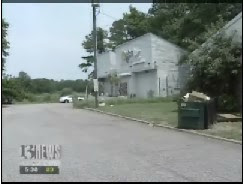 Residents and local reporter weights on MJ's move to Virginia. Teddy Riley has his own studio in the city!

(register here or use Your MJ.hu account: REGISTER )
Posted by LeslieMJHu at 1:29 AM No comments: 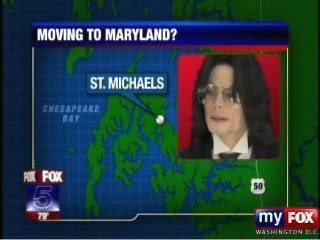 (register here or use Your MJ.hu account: REGISTER )
Posted by LeslieMJHu at 3:25 AM No comments:

MSNBC 's Filing in the Jackson vs Universal case 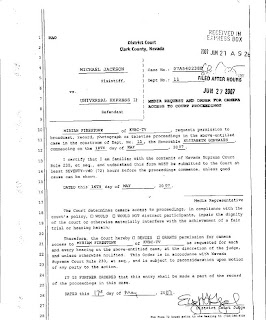 The media wants to get a piece of MJ.
Posted by LeslieMJHu at 3:18 AM No comments:

Columbia Records will release the "Michael Jackson Cool Down Experience" CD on August 22nd, 2007 as part of the Cool Down Experience series. This release offers late-night, laid back versions of MJ's classic hits.
Posted by LeslieMJHu at 2:56 AM No comments:

Updates in the Wiesner Case

The parties held a phone conference on June 29th, 2007 in order to find out if they can settle the case. Unfortunately the parties could not agree in some terms, the case will go on trial this September.
Posted by LeslieMJHu at 2:52 AM No comments:

This DVD has been released on April 7th, 2007 in France. This is the French version of the infamous "The Real Michael Jackson - Man In The Mirror" movie.
Posted by LeslieMJHu at 10:39 PM No comments:

They included "You Are Not Alone" on this compilation CD.

I've decided to put my Michael Jackson news' here. Because of I can update this blog easier, I'll be able to share more information then before.

If You wish to use any of the news items, please mention me with a return link to my website (www.michaeljackson.hu).

If You have any questions or comments, please don't hesitate to contact me by sending an e-mail message to info@michaeljackson.hu

Best regards,
Leslie
Posted by LeslieMJHu at 10:25 PM No comments: